Day 1 : Arrival - Phnom Penh
On arrival at Po Chen Tong Airport , you are met by our guide and transferred to hotel. The capital of Cambodia, Phnom Penh lies near the confluence of the Mekong and Tonle Sap Rivers. This riverside town still maintains considerable charm despite its recent turbulent history. An afternoon city tour acquaints us with some major sights of Phnom Penh. The private quarters of the Royal Palace are now home to the royal family and are therefore very close to the public. At the northern area of the palace grounds is Silver Pagoda, the most sacred temple in the country. We visit both structures as well as the National Museum for an appreciation of the splendour of Khmer history. The sightseeing completes with a walk uphill to visit the legendary Wat Phnom and catch a fantastic view over the surrounding areas. Overnight in Phnom Penh.

Day 2 : Pnom Penh - Siem Reap - Angkor Temples
An early morning transfer to airport for flight to Siem Reap. This tranquil town is our base for exploring the world famous temples of the ancient city Angkor, which was the capital of the powerful Khmer Empire from 802 AD to 1350 AD. Upon leaving Siem Reap Town we set off on a short drive to the archeological area and spend our time to visit the most striking structures. They are the South Gate of Angkor Thom which is famous for its series of colossal human faces carved in stone, the impressive Bayon Temple, the Royal Enclosure, Phimeanakas, the Elephant Terrace, the Terrace of the Leper King and the architectural masterpiece of Angkor Wat. We stroll around this massive monument, exploring the many galleries with columns , libraries, pavilions, courtyards and ponds full of water reflecting the towering temple before we embark on a walk up to Phnom Bakheng Hill to admire the spectacular sunset over these sandstone monuments. Overnight in Siem Reap. (B)

Day 3 : Siem Reap - Departure
The jungle covered temple of Ta Prohm is an incredible sight. There are enormous fig trees and gigantic creepers which embrace themselves in the stone foundations of the structure giving the impression of man's creation being reclaimed by the powerful forces of nature. We explore the well known Ta Prohm and some nearby temples including Banteay Kdei, Sra Srong, Ta Keo, Thommanon and Chau Say Tevado. They almost belong to the small circuit according to the archaeologistsï¿½ division.The trip ends after your transfer to Siem Reap Airport for departure.(B) 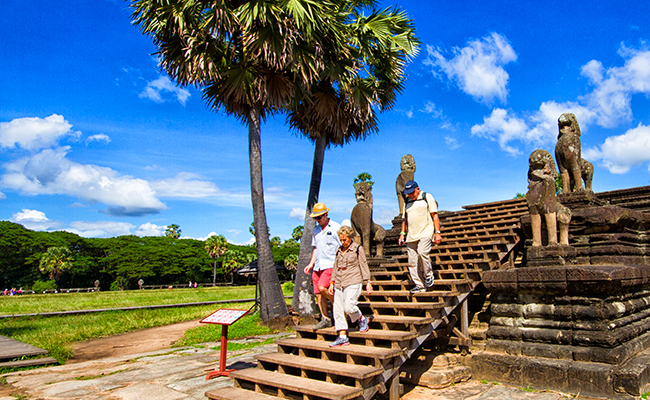