Day 1 : Arrival - Phnom Penh
On arrival at Po Chen Tong Airport , you are met by our guide and transferred to hotel. The capital of Cambodia, Phnom Penh lies near the confluence of the Mekong and Tonle Sap Rivers. This riverside town still maintains considerable charm despite its recent turbulent history. An afternoon city tour acquaints us with some major sights of Phnom Penh. The private quarters of the Royal Palace are now home to the royal family and are therefore very close to the public. At the northern area of the palace grounds is Silver Pagoda, the most sacred temple in the country. We climb up a small hill to visit the legendary Wat Phnom and catch a fantastic view over the surrounding areas. Overnight in Phnom Penh.

Day 2 : Phnom Penh - Tonle Bati - Phnom Penh
Today we continue seeing this delightful city with the National Museum, which is exclusively dedicated to Khmer art and sculpture. The majority of the exhibits are from the Angkor period from 9th to 15th century, but some date from as early as the 4th century. The next stop is one of the city's lively open markets, Psar Toul Tom Pong, all called the Russian Market. We enjoy a walk around this bustling trading center and see plenty of local handicrafts and artifacts. The painful bloody rule of the Khmer Rouge still can be seen at the Tuol Sleng Prison Museum and the notorious Killing Fields of Choeung Ek. We visit these infamous sites before heading south to explore the complex of Tonle Bati with Ta Prohm and Prasat Yeay Peo Temples. The ideal way of spending your last evening in Phnom Penh is to relax in a cafe by the riverfront. Overnight in Phnom Penh. (B)

Day 3 : Phnom Penh - Siem Reap - Angkor temples
The following destination of our trip will be Siem Reap via a short flight from Phnom Penh. On arrival you are greeted by our guide and transferred to hotel. This tranquil town is our base for exploring the world famous temples of the ancient city Angkor, which was the capital of the powerful Khmer Empire from 802 AD to 1350 AD. Upon leaving Siem Reap Town we set off on a short drive to the archeological area and spend our time to visit the most striking structures. They are the South Gate of Angkor Thom which is famous for its series of colossal human faces carved in stone, the impressive Bayon Temple, the Royal Enclosure, Phimeanakas, the Elephant Terrace, the Terrace of the Leper King and the architectural masterpiece of Angkor Wat. We stroll around this massive monument, exploring the many galleries with columns , libraries, pavilions, courtyards and ponds full of water reflecting the towering temple. OvernightN in Siem Reap. (B)

Day 4 : Siem Reap - Angkor temples
The jungle covered temple of Ta Prohm is an incredible sight. There are enormous fig trees and gigantic creepers which embrace themselves in the stone foundations of the structure giving the impression of man's creation being reclaimed by the powerful forces of nature. We explore the well known Ta Prohm and some nearby temples including Banteay Kdei, Sra Srong, Ta Keo, Thommanon and Chau Say Tevado. They almost belong to the small circuit according to the archaeologist's division. Upon leaving this area we visit various famous temples of the grand circuit such as Preah Khan, Kravan, Neak Pean, Krol Ko, Ta Som, East Mebon and Pre Rup. We round off our exciting day with a walk up to Phnom Bakheng Hill to admire the spectacular sunset over these sandstone monuments. Overnight in Siem Reap.(B)

Day 5 : Siem Reap - Angkor temples - Banteay Srei
Heading out of town we drive beyond the Angkor Complex through the Preah Dark village to the intricately carved and well preserved Banteay Srei Temple. We stroll around this beautiful landmark which was designed to leave no space undecorated. The roads begin to deteriorate but it is still fascinating to drive past the rolling mountain scenery towards Kbal Spean. This interesting site locally named the river of 1000 Lingars, has been largely reclaimed by the jungle; however it invovles a walk to catch a view over its riverbed carvings. The next stop is Banteay Samre which is adorned with striking relief depicting the scenes of Vishunu and Krishna legends. Today we also have a chance to explore the ancient Khmer civilization site of Hariharalaya which flourished in the late 9th and earlier 10th centuries. These are the earliest temples in the Angkor area and are referred to the Rolous group. Overnight in Siem Reap. (B)

Day 6 : Siem Reap - Departure
The temple exploration is not only activity in Siem Reap. We visit the famous Tonle Sap Lake on a boat trip out. This shallow lake boats the largest natural fresh water body in Southeast Asia and flows into the Tonle Sap River which joins the Mekong River in Phnom Penh. The traditional boat navigates along a small river towards the gigantesque lake, giving us a chance to explore floating village, local life style, friendly children in small boats and fishermen pulling in morning catch close up. This excursion is all depending on your departure time. The trip ends after your transfer to Siem Reap Airport for departure. (B) 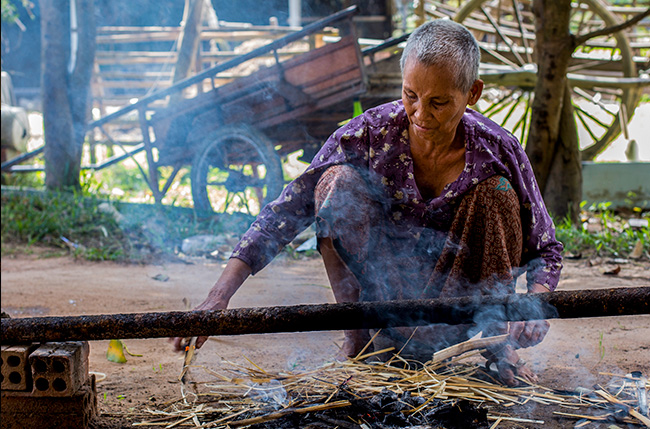